The best-known resident of Tunbridge Wells was (and still is) an anonymous one. Many people, even if they know very little about the town, have heard of the newspaper correspondent signing themselves ‘Disgusted of Tunbridge Wells’. The picture this conjures is of an irate and red-faced retired colonel taking up his fountain pen to fire off a letter to the newspapers, in which he rails against poor public services, or declining standards of behaviour.

In the nineteenth century and the first half of the 20th century it was common practice to use a pseudonym when writing to the local newspaper. Some correspondents indicated their status – ‘A ratepayer’, ‘A resident’, ‘A customer’, or ‘A pedestrian’. Others added a bit more detail – ‘An indignant mother’, ‘A lover of waifs and strays’ or, in one case, ‘Another who would bathe regularly’. 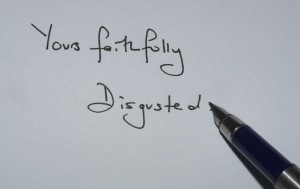 In the 1920s and 1930s a number of people writing letters to the Kent & Sussex Courier signed themselves ‘Disgusted’, a signoff which had been used occasionally before, but now became more frequent. Their disgust was aimed at a wide variety of targets. One letter criticised the design of new houses being built at Hawkenbury, which were ‘a blot on the landscape’. Another complained of the din and racket made by three Salvation Army Bands playing across the town on Sunday afternoons, more suited to ‘a typical Bank Holiday on Hampstead Heath’. And a third, from someone claiming be an animal lover, complained of dogs – ‘Dogs in the highways, dogs in the bye-ways, dogs in lanes, dogs in ditches, dogs in the recreation grounds – dogs everywhere. Dogs yapping around all day and sometimes all night’.

In a letter printed in the Courier on 7th September 1928, the subject was traffic. In the period since 1895, when Sir David Salomons organised Britain’s first ever exhibition of motor vehicles at Tunbridge Wells (in the area of town now known as Showfields) the number of cars on the roads had increased rapidly, a development which was not welcomed by everyone.

The correspondent was clear that the Council were to blame for the problem. ‘It passes my comprehension’ they wrote ‘how our civic rulers have tolerated – I was going to say condoned – the almost daily growth in the nerve-wracking traffic which thunders over our roads’. They had two specific complaints. Firstly the Council had granted over a hundred licences for ‘heavy passenger-carrying buses’ to run on roads that had not been built for such traffic. Secondly they had taken too long to fix a speed limit, and had then set it too high – ‘Thirty miles an hour…is fifteen too much’.

The letter-writer began by thanking Mr Editor ‘for giving so much publicity to the din’ and ended with a request to ‘keep up the agitation……then perhaps the Council will be roused from its slumber’. They signed off – ‘Disgusted, London Road, Tunbridge Wells’.

It is said that during the 1950s the editor of the Tunbridge Wells Advertiser instructed his reporters to fabricate readers’ letters on controversial subjects, because not enough real ones were coming in and the paper was losing ground to the Courier, its main competitor. Some of the reporters signed their letters ‘Disgusted of Tunbridge Wells’.

The phrase became more widely known in the early 1960s when it was used as a letter-writing character’s name in ‘Take it From Here’, a popular radio comedy show starring Jimmy Edwards, and in 1978 when the BBC used it as the title for their new viewers’ feedback programme.

Gradually it became fixed in popular culture and it is still widely known. These days any concern expressed by local residents – whether it is the traffic (still a problem), Southeastern’s poor train service, the noise from low-flying Easyjet planes on their way to Gatwick, or even the arrival of Poundland rather than Waitrose in the town – still generates headlines with ‘Disgusted’ somewhere in them. Some of the town’s residents would like to shake off the label, but ‘Delighted of Tunbridge Wells’ doesn’t have the same ring about it.